Now over 15,000 shows have been played at The Stone Church!

The Stone Church is a venerable music club, restaurant and function space in downtown Newmarket, NH. Its history is as colorful as the vibrant murals of Bob Marley, Johnny Cash, Jimi Hendrix, Jerry Garcia, and Frank Zappa that decorate its exterior walls! 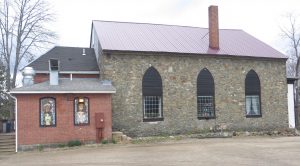 Oh, If These Stones Could Talk!

Erected in 1832, the building first served as a Universalist Meeting House, setting into motion a dynamic lifetime of providing a hub in which people from all thoughts and walks of life could congregate and share ideas and culture. The building became a Unitarian Meeting House twenty years later. In 1865, it was sold to the Roman Catholic Church, thus establishing the first Catholic Church in Newmarket, NH. In 1890, the congregation moved down to Main Street into a new church next to the current town hall, and the Catholics then used The Stone Church as a parochial school for the  French-speaking children of the town.

The building then shuffled through various secular personalities, including a roller-skating rink, playhouse, and VFW hall. In the 1950s, The Newmarket Heel Factory inhabited the building, helping to secure Newmarket as a bustling mill town centered on the manufacture of shoes. In 1968 the building was ravaged by a fire. Visitors can still see evidence of this event in the charred beams of the main room and up in the Ballroom. The firefighters were reluctant to break the cut-glass windows of the church to vent the fire, much to the dismay of the Fire Chief. The story goes that the firefighters sent a torrent of heels out the front door, down the Zion Hill, and into the Lamprey River with the forceful flow of water from their hoses! 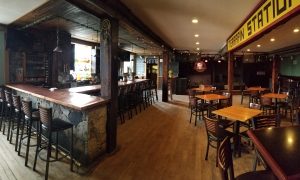 In 1970, the building was sold to two UNH students and a good friend.  John Williamson, Rod Philbrick and Arnie Taylor originally planned to open a coffee house, but quickly realized they couldn’t sell enough coffee to pay the bills.  They decided to sell beer, but weren’t old enough to drink…legally.  So Rod’s mom, Jane Philbrick stepped up and got the liquor license in her name.  We are forever grateful to Jane! 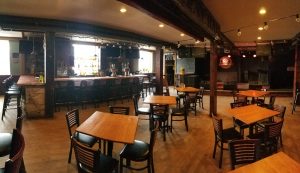 Visitors to The Stone Church come to relive their memories of the 70’s, 80’s, and 90’s. Many speak fondly of when the room was heated by a wood stove, and customers brought their dogs inside to see the music. For some, these memories are but a vague, happy haze, an indication of the time that they grew up in. And for those current students at UNH and others, they come to create new memories, to put their mark on this historical landmark.

That history can be read from the artifacts still strewn about the interior of The Stone Church. We’ve come across hand-painted signs from farmers’ markets, leftover propaganda from the unions in the mills, anti-Vietnam sentiments that were scrawled on the walls, condom and earplug machines containing long-expired products, decades-old discarded liquor bottles, roller-skate scuff marks, a piano and other instruments in various states of disrepair, numerous ancient fliers, and related flotsam and jetsam that tells the tale of a spirited, 180-year old community meeting house.  Yeah, these stones have absorbed a lot of good vibes.  Some say you can feel the spirit!